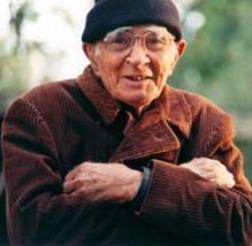 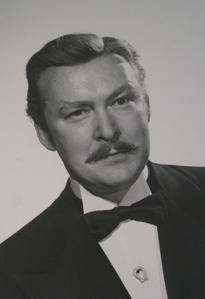 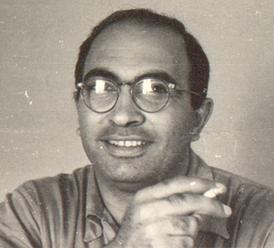 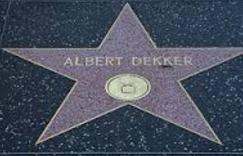 Albert Isaac Bezzerides was a novelist having written The Long Haul before the studio's employed him as a screenwriter.  He went on to write There Is A Happy Land and Thieves Market.  Both The Long Haul and Thieves Market were made into films.  Ai Bezzerides was well known to write hard hitting, often violent and provocative films...he often portrayed the lives of the down-trodden, especially waitresses and truck drivers.

In 1942 Ai Bezzerides wrote Juke Girl that starred Ronald Reagan and Ann Sheridan.  This film was a classic hard hitting film full of treachery and intrigue around the fruit and fruit packing business.  Ai Bezzerides has grown up in those surroundings in California.  Ironically Reagan played the role of a union organizer.  In 1951, Bezzerides wrote on Dangerous Ground, which starred Ida Lupino.  Another hard-hitting film based on a tough cop that beats up suspects.

In a similar vein to his other films, Bezzerides wrote Kiss Me Deadly in 1955.  This film was later listed by Martin Scorsese as one of the top eighty films you must see before you die.  It is often cited as a film noir classic.  It was during this film that Bezzerides met Albert Van Dekker and the house was purchased.  Although Bezzerides clearly had left wing leanings (like Dekker) he was not blacklisted but was, according to some accounts, grey-listed by the studio's.

Bezzerides wrote such hard-hitting lines in his scripts that Humphrey Bogart and Bob Mitchum used to give him scripts from other films to "punch up" and make them sound tougher.  Bezzerides became life-long friends with the actors.

He was a notoriously gruff and cantankerous character.  He certainly loved the house but did not believe in maintaining or improving it in any way, having said to his daughter "a Schindler dies with it's owner"...forgetting, of course, that Dekker was the original owner.

AI Bezzerides was the subject of two documentaries before his death in 2007, "Buzz" and "The Long Haul of AI Bezzerides"

Albert Van Dekker commissioned the house in 1939 and occupied it from 1940 through 1955, raising his family there.  Albert Dekker was an accomplished and respected stage actor before he moved to Los Angeles.  He appeared in 70 feature films, with co-starring roles in Honky Tonk (with Clark Gable), Two Years Before the Mast (with Alan Ladd), Seven Sinners and In Old California (with John Wayne), The Killers (with Burt Lancaster) and classics such as Beau Geste and Kiss Me Deadly.  In addition to his extensive stage and film acting he also appeared in many TV shows, in fact, his Star on the Hollywood Walk of Fame is for his TV work.

In 1944 Albert Van Dekker won a seat as a Progressive State Assemblyman in California, however he resigned in 1946 citing the lack of pay and the need to keep his acting career going.  Clearly he had very liberal and left wing leanings.  In the early 1950's he openly criticized Senator McCarthy and was subsequently blacklisted.  Later he would say "all I could do was lecture at College's and Women's Clubs".

​​Toward the latter part of his acting career he appeared in more TV shows and on stage.  He starred in Death of a Salesman for many years and won a Tony for his role in A Man For All Seasons. His last film appeared the year after his death...The Wild Bunch with Ernest Borgnine, in 1969.

In 1955, while acting in Kiss Me Deadly, he met AI Bezzerides the screenwriter for the film.  Eventually a deal was struck...AI Bezzerides wanted a place in solitude so he could write...Albert Dekker needed to be flexible to go on stage in NY and earn money to avoid the consequences of the blacklist.  The house was sold. 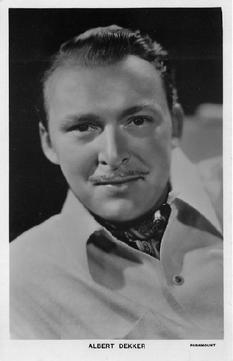